More than once, Cindy contemplated ways to incapacitate Robert Hansen so that she could escape his deadly grasp. It was, to be sure, a case of magical thinking. The reality was that when she wasn’t tied with a rope, she was tied with a chain. And the handcuffs were ever-present. The cliche that “desperate times call for desperate measures,” comes to mind. No question, Cindy was desperate. Hell, she was ready to bean him with a pool stick.

A pool stick? Really? If she was going to save herself, her cooler instincts needed to prevail.

FLOTHE: When you got… Did he tell you anything when you got into the car? At the house.
CINDY: Like what part?
FLOTHE: Did he talk to you or say anything to you when you’re getting into the car in the garage?
CINDY: Yep. ‘Lay down. Don’t ‘cause no problems, because whoever sees you in my car I’m gonna have to kill them and you.’
FLOTHE: You say he covered you with a blanket. What did the blanket look like?
CINDY: Like a regular Army blanket.
FLOTHE: Do you know where he got that?
CINDY: Un unh.
FLOTHE: So he had the rope in the front seat…
CINDY: Yep, and the gun too.
FLOTHE: And the gun. And you’re handcuffed how? Front or back?
CINDY: In the front. Laying down in the back seat. And my shoes were on the right hand side in the back seat. And I didn’t have a purse. And I had a green coat. I mean, I had a purple coat and a blue and white shirt and [end of tape]

FLOTHE: It’s 9:17 pm. We ran out on the other tape and we just put another tape in. I was asking you the question, Cindy, did you leave anything in the house?
CINDY: Um… Just a towel that I had peed on. I was scared to pee… I wasn’t too scared I was just…
FLOTHE: Why was the towel there to begin with?
CINDY: I don’t know. It was laying on the couch. You see, I couldn’t reach it very good. I had to reach up with my leg and my arm and stretch, ‘cause it was choking me. But I was gonna hit him with a pool stick. But then I figured if I killed him, I would be left for dead. And if I didn’t kill him, he would kill me. 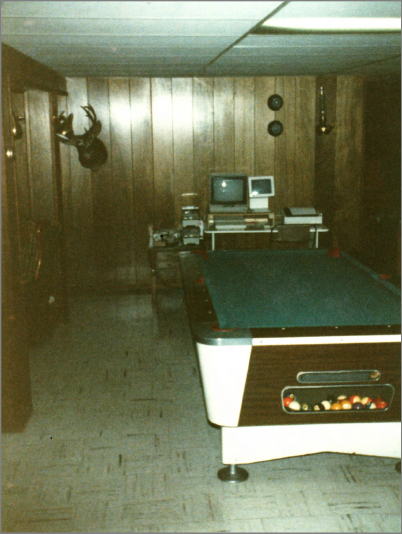 FLOTHE: Where was the pool stick?
CINDY: Laying on the pool table. (sniffles)
FLOTHE: OK.
[pause]
FLOTHE: Did he have a holster with that gun?
CINDY: No, he didn’t.
FLOTHE: Did you see any other guns at any time?
CINDY: No, I did not.
FLOTHE: So there was a rope in the front seat, the gun was in the front seat and you’re in the back seat.
CINDY: Yep. Laying down.
FLOTHE: Laying down. Now when you’re at the airport… Oh, you mentioned the airplane seat… Now, when does that come in?
CINDY: OK. That was, see… I was chained downstairs when he was getting everything ready in the car. OK. And see what he did, I think, is put that in the trunk.
FLOTHE: ‘Cause it was in the back seat when he picked you up.
CINDY: Uh huh. And it wasn’t in there when I laid down.
FLOTHE: When you left the house, do you remember whether or not that car was still in the driveway?
CINDY: No, I didn’t even see. I was laying down.
FLOTHE: So you don’t know if it was there or not?
CINDY: No. But I know it was there when we came there.
FLOTHE: At any time you were in the house did you hear any noises or sounds that…
CINDY: It sounded like there could have been other people there, but I don’t really… I’m not for sure. Could have just been the dogs.
FLOTHE: What makes you think there might have been somebody there?
CINDY: ‘Cause I kept hearing walking around and all this goofy stuff. But I could have been just, you know, trippin’.