Since Beth’s purported destination was the Bi-Lo convenience store, troopers did their due diligence and checked to see whether Beth actually arrived there. That wasn’t all. There was a nearby gas station that also sold soda. Yes, check that one, and any others in the vicinity. And check the neighbors too.

Kelly Grant; worked Bi-Lo December 22, 1971
“I don’t know the girl and I do not believe I waited on the girl when she was in the store.”

Glen Smalley; worked Turnagain Union 76 December 22, 1971
“I know the girl that was murdered very well. I have known her for 18 years. I did not see her at all that night.” Asked about Greg Nicholas, Smalley said, “The only Natives we had, that were drunk, were three Native males and one very drunk female Native. They were driving a late model blue Ford car.”

Geraldine Richards; worked Husky Bottle Liquor Store December 22, 1971
“I don’t recognize the girl and she has not been in here that I know of.”

Gas Station Attendant; worked Macey’s Service Station December 22, 1971
“I went to work at 8:00 am Wednesday and got off at 10:00 pm that night. I know Beth’s brother Joe and have numerous times seen Beth. I did not see her that night as we were quite busy here at the service station.”

Neighbors & Other Strangers
J. Dice; neighbor
“I know Beth. I saw her on December 22nd at approximately 9:00 pm, headed south on Captain Cook Dr., toward Northern Lights Blvd. She stood under a lamp post. A car had stopped, headed south on Captain Cook and the door was open. She was talking to someone in the car. I did not see her get in. It was a dark colored car, make unknown.” 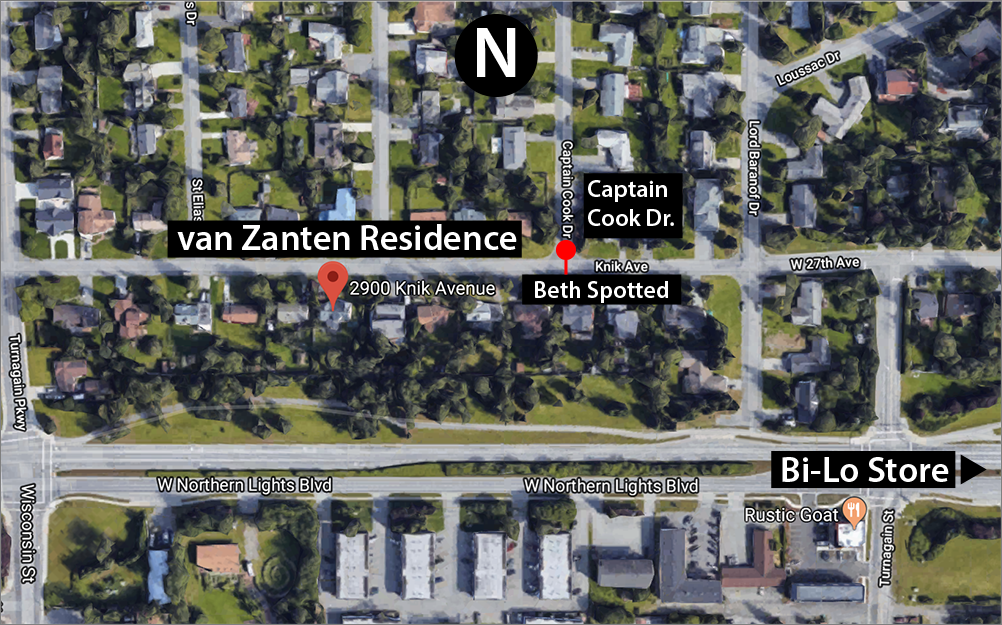 The Turnagain Heights neighborhood has changed considerably since 1971. New streets and new homes have come in. Businesses that were there at that time are now gone. Knik Avenue, Captain Cook Dr. and Northern Lights Blvd. are all there much as they were long ago. (Google Maps; illustration by Leland E. Hale) NOTE: The Bi-Lo store was towards the intersection of Northern Lights and Minnesota Dr.

Becky David; neighbor
“I did not know the van Zanten family or the daughter, but I have seen a pretty rough bunch hanging around the house. And also they hold some pretty loud parties.”

Other Strangers
Troopers interviewed a witness who saw Beth walking to Bi-Lo between 8:45 and 9:00 pm. A second witness saw Beth walking away from her house around 10:00 pm. Yet another witness claims to have seen Beth hitchhiking between 10:00 and 11:00 pm.

Several neighbors also claimed to have seen Beth hitchhiking, including one who said she had picked her up in the past. “That girl hitchhikes quite a bit. I guess she found what she was looking for.”