The hidden location of Hansen’s flight maps was, one supposes, strategic. That or eerily macabre. There were two of them. One found behind the bed he shared with his wife. Frank Rothschild imagined Hansen’s hidden pleasures. “You can just see him when he has a moment to himself,” Rothschild declared, “pulling them out and looking at them and getting all excited looking at the little X’s on the map, of women he’d killed and buried.” And then one wonders… Where did his wife fit in his game? Where was Darla while Bob Hansen was taking these hidden moments? 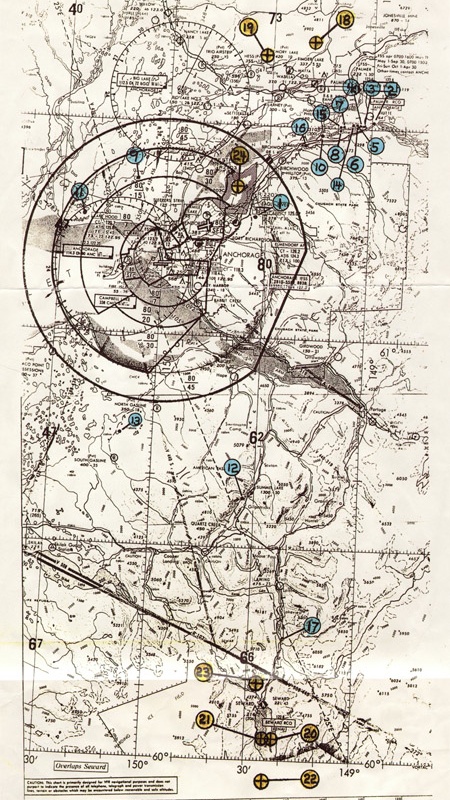 What we know is this: Darla Hansen and Robert Hansen were, for many moments in their lives, like two ships passing in the night. As a teacher, Darla followed the rhythm of the school day. She was an early morning to early afternoon person. As a baker, Bob followed an evolving clock. In the 70’s, when he worked at the Safeway bakery, he was up before dawn and finished by 2:00. Later, when he owned his own bakery, he arrived at work by 1:00 a.m. and was off by 9:00 or 10:00 a.m., sometimes later, depending on the workload.

As his career evolved, therefore, the end of Bob’s bakery day started to coincide with the times when his wife and kids were elsewhere. At school, to be exact. And the upshot was that, in this game — if one can call it that — Bob Hansen had plenty of time to himself. Time to make maps. Time to enjoy them in a perverse display of ghoulish pleasure.

Time to stalk the women of Anchorage. Time to kill them.

ROTHSCHILD: “He admits to there being at least 20 or 30 women where everything went okay and he dropped them back off on the streets. We fear there are many more, we don’t really believe for a minute that he’s told the full story. He is a compulsive liar, he gives us what he knows he has to give up — give us [that] and no more.

“It’s a game you see, Your Honor, it’s a game with authorities, it’s a game with police, it’s trying to outfox, it’s the big thrill. And his family, well, from back in ’62 on, he always talked about his family. Oh, I care so much for my family, I’m so worried about how this will affect them. That’s a fiction. His family was a prop so he could hide behind decency, to show I’m a family man. And he’s a baker and he makes money and it’s just all part of a game.”

But the hidden maps would finally, once and for all, give up the game.