This is Installment Two of the September 27, 1983, interview of Cindy Paulson by Sgt. Glenn Flothe, AST. In this installment, Cindy provides additional information about how she met — and ended up with — Robert Hansen. Cindy reveals that Hansen flashed some bills at her — and that she was entranced by the thought of his money.

“He said ‘cause he used to work on the slopes and that he would come down and spend money for a girl and go to her room for ten or fifteen minutes. And he said well he was gonna start getting his money’s worth.” (Cindy Paulson)

Cindy Paulson
FLOTHE: Tape’s turned back on. Time is 8:15. Cindy I notice that you are visibly upset and have tears and crying. Apparently you’re bothered by this?
CINDY: Yes, it’s real… Hell yeah, I’m bothered by it.
FLOTHE: Do you feel that he was going to hurt you?
CINDY: You know, I didn’t feel nothing, ‘cause I knew I wasn’t gonna live. I mean, man, what he did to me, he had to kill me. (pause)
FLOTHE: Hmm. (pause) When did you first see this man, Cindy?
CINDY: I believe it was on a Friday and I gave him my telephone number and he called me on a Saturday. And I was supposed to meet him but I didn’t show up ‘cause I overslept.
FLOTHE: OK. Where were you at when you saw him on a Friday?
CINDY: On Fourth and Denali.
FLOTHE: And about what time was that?
CINDY: It was about maybe four in the morning, three-thirty in the morning.
FLOTHE: Did he approach you or did you approach him?
CINDY: He approached me. I’m not correct on the times, OK?
FLOTHE: OK.
CINDY: … I could say the time but it may not be the correct one.
FLOTHE: OK. It’s been some time since you last talked to him, in fact, it’s been quite some time.
CINDY: Tons…
FLOTHE: So if you’re unsure about something (Cindy coughs) just tell me, all right?
CINDY: All right.
FLOTHE: OK. So it’s early in the morning…
CINDY: Um hmm…
FLOTHE: Friday morning. And he contacts you. Do you remember what he’s driving on Friday?
CINDY: Yep. A metallic green Buick Century. With a cut in the back.
FLOTHE: What do you mean by a ‘cut in the back’?
CINDY: Like a new Seville.
FLOTHE: OK.
CINDY: Like a convertible… (inaudible) 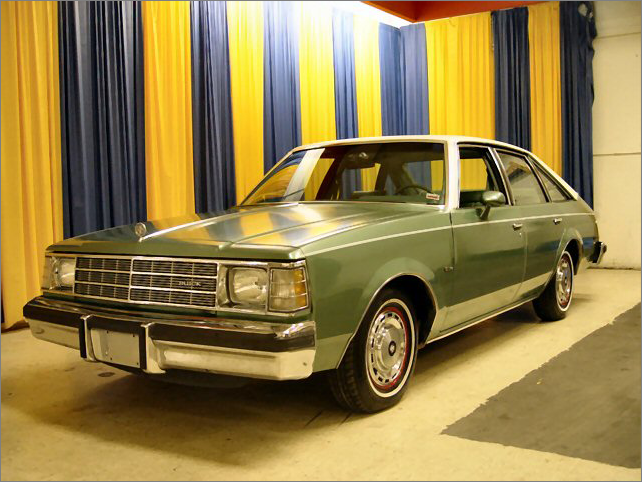 1978 Buick Century 4-Door Sedan (This photo is NOT Hansen’s Buick, but it is similar)

FLOTHE: Did you have conversation, then, with him on Friday?
CINDY: Yep.
FLOTHE: Did you get into his car, or did he just get out or what?
CINDY: Nope. He had rolled the window down and I opened the door and I sat down and I talked to him.
FLOTHE: What did he ask you?
CINDY: He said that he would like to have some company. And that he had to work and he couldn’t do it then. And so I gave him my telephone number… And he was going… To be frank, honest, I was asking him for change for a cigarette machine. And he had pulled out his wallet and showed me a whole bunch of money…
FLOTHE: You saw a bunch of money in his wallet?
CINDY: Um hmm. (inaudible).
FLOTHE: Did he give you change?
CINDY: Uh huh…
FLOTHE: Or did he give you any money? I mean, bills, or did he just give you the change?
CINDY: I think he gave me a five. ‘Cause that was the smallest he had.
FLOTHE: Did you give him your phone number or did he write it down on something? I mean…
CINDY: He wrote it down on a (inaudible).
FLOTHE: What was your phone number at that time?
CINDY: I gave him the number at the Big Timber.
FLOTHE: Did you give him the room number too?
CINDY: Yep.
FLOTHE: And contact Cindy at this phone number and this room number…
CINDY: Uh huh.
FLOTHE: Did he tell you what his name was?
CINDY: ‘Bob’ and then ‘Don.’ It was ‘Don,’ and then… OK, it was ‘Don’ and then after we were at his place, and he was going to take me to the airport, he was saying about ‘Bob.’
FLOTHE: Was there anybody with him on Friday?
CINDY: No. Just him by himself.
FLOTHE: About how long did you have contact with him on Friday?
CINDY: About ten minutes.
FLOTHE: Did he seem pretty sincere about wanting to get with you?
CINDY: Uh huh. He seemed really like a pretty good guy. (inaudible)

FLOTHE: And then he contacted you on Saturday.
CINDY: I talked to him and made an appointment to meet him and I didn’t show up. I overslept.
FLOTHE: At what time did he call you on Saturday?
CINDY: Um… I think it was around six.
FLOTHE: Six in the evening?
CINDY: Uh huh. I said I could meet him at ten or else at eleven.
FLOTHE: Where were you going to meet him at Saturday?
CINDY: I believe it was right there right across from the Sheraton on Fifth and Denali. 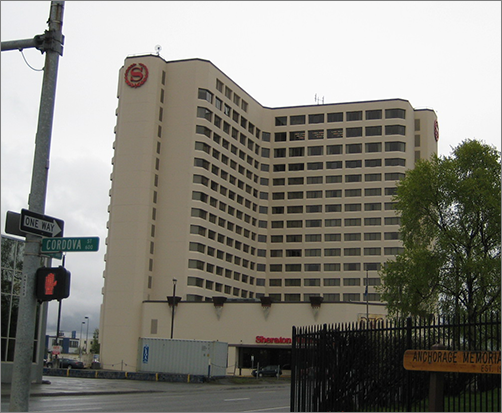 FLOTHE: And then you overslept and consequently didn’t meet him.
CINDY: Uh huh.
FLOTHE: And when did you hear from him again?
CINDY: Well, I didn’t. I saw him the next day, Sunday.
FLOTHE: Did he call you first or did he just come by?
CINDY: He just drove by. He pulled over and I recognized him immediately.
FLOTHE: OK. This is Sunday night or early Monday morning?
CINDY: Sunday.
FLOTHE: About what time?
CINDY: About eleven, eleven-thirty.
(pause)
FLOTHE: What was he driving then, Sunday night?
CINDY: The Buick Century.
FLOTHE: The same car as on Friday?
CINDY: Yep.
FLOTHE: Do you remember how he was dressed on Sunday?
CINDY: In jeans. And he had a green shirt or else it was plaid. And if I’m not mistaken I think he had a green or a light t-shirt underneath it. It’s a over shirt. And he fuckin’ had a tan or an Army green tan coat or Army green… And boots.
FLOTHE: What kind of boots?
CINDY: Regular… Just working boots. And brown socks.
FLOTHE: And what color were his boots? Black or brown?
CINDY: They were a dark brown. Brown shoes. But he had brown socks on.
FLOTHE: Describe this man to me.
CINDY: He has kind of darkish, brownish hair. And he’s short. He’s got like frog warts on his face. Buck teeth. And if I’m not mistaken I think he got green or blue eyes. And he’s about five six, weighs about 170 pounds.
FLOTHE: I wanna show you six pictures, Cindy, and the person that we’re talking about may or may not be in here. See if there’s anyone in here that you might recognize. Be sure and look at all six.
CINDY: That’s it.
FLOTHE: Which photograph is that?
CINDY: Number five.
FLOTHE: Number five. Looking at picture number five, is there anything different about him as you saw him, compared to the picture… 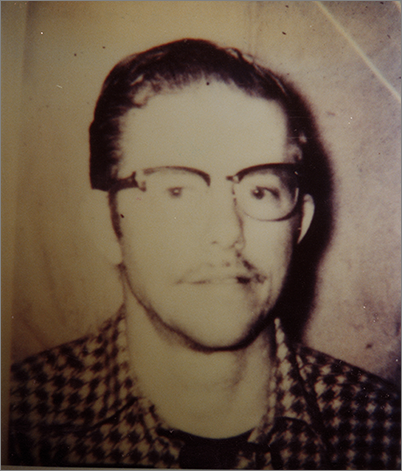 CINDY: A little moustache.
FLOTHE: Uh huh. Did he have a moustache, Cindy?
CINDY: I don’t think so.
FLOTHE: How about the glasses?
CINDY: They look the same. Maybe they were different frames.
FLOTHE: Hairstyle?
CINDY: Same.
FLOTHE: You’re positive.
CINDY: I’m positive.
FLOTHE: Were you shown any pictures of him before?
CINDY: Yep.
FLOTHE: And did you pick an individual out that was…
CINDY: The same person.
FLOTHE: The same person. And who showed you those pictures?
CINDY: A police officer at the Sixth Avenue police department.
FLOTHE: If you can move your hand away from your face a little bit… I want to make sure we get it on the tape recorder, OK?
CINDY: OK.
FLOTHE: Thank you. So he shows up Sunday night, then.
CINDY: Uh huh.
FLOTHE: And he contacts you at where?
CINDY: On the corner of Fourth and Denali. (crying)
FLOTHE: OK. And he’s driving the same car.
CINDY: Yeah.
FLOTHE: OK. And when he pulled up, did you just go get in the car, or did you talk to him…
CINDY: (interrupting) Well, I went over there ‘cause at first I didn’t recognize him.
FLOTHE: Ah.
CINDY: And then after I looked I recognized him. He offered me $200 for a blowjob in the car, ‘cause I wouldn’t go to his place. ‘Sure, no problem,’ I’m like, ‘fine, no problem.’ Hey, no problem, you know.
FLOTHE: Two hundred dollars is a lot of money…
CINDY: Hey, for a blowjob in the car, hell yeah. It was funny though, ‘cause before, when he was getting ready to take me to his cabin, he said that, um, there had been seven other girls before me. And that, um, I was lucky because usually the other ones stayed a week. That’s why he did it. He said ‘cause he used to work on the slopes and that he would come down and spend money for a girl and go to her room for ten or fifteen minutes. And he said well he was gonna start getting his money’s worth. So he felt he should go and get the girl and take her over to his house. And do what he pleased with her.
FLOTHE: When did he tell you this?
CINDY: Um, he had me chained around my neck for a time. There was a bullet hole in the floor. Way down on the floor. Only reason I know was ‘cause I was layin’ there. It’s way down on the bottom.
FLOTHE: When you got into the car, and you were giving him a head job, is that when he pulled out the gun?
CINDY: Nope. He was messin’ with my neck and I was kinda trippin’. It just felt (inaudible) and he pulled the gun out and that time he had handcuffs on my hands and I couldn’t get the door open.
FLOTHE: You’re trying to get out? You mentioned a minute ago, Cindy, that he wanted you to go home with him, or something, and you didn’t want to go home with him, or…
CINDY: Uh huh. ‘Cause at the time, I was very new to Alaska and I don’t never go to anybody’s house. And he suggested that we could go to his place. I said, ‘no, we can go to my place.’ He said, no, he didn’t want to. I said, fine, we can do it in the car. No problem.
FLOTHE: Where did you go when you did it in the car?
CINDY: Right around Fourth and Denali. Over by that house on Fourth, with the pickup truck camper.
Purchase Butcher, Baker