This is Installment Four of the September 27, 1983, interview of Cindy Paulson by Sgt. Glenn Flothe, AST. In this installment, Cindy talks about — and proves — her observational powers, in this case related to Robert Hansen’s house on Old Harbor Road. Her ability to accurately describe every detail of her ordeal was crucial to establishing her credibility as a witness. Too often, Robert Hansen was believed instead of the women, many of them dancers or prostitutes, who testified against him. [Installment Three]

FLOTHE: So he takes you to the house. Now, from reading your report apparently you had a pretty good description of the house that you gave the police. Do you know your way around town well, or why did you happen to remember so well where it was at?
CINDY: Because when I drove past the house there was a sign that said ‘Dead End.’
FLOTHE: You drove past the house?
CINDY: Up to the house.
FLOTHE: Oh and you saw a sign that said ‘Dead End?’
CINDY: Yes.
FLOTHE: How did you know this? Did you know the street name?
CINDY: No. You see, when we was driving I observed everything. ‘Cause this motherfucker wasn’t getting away with it.
FLOTHE: I hope not.
CINDY: I knew I was in trouble. And I really, really… If there was any chance of me getting away, he wasn’t getting away with it.

FLOTHE: You also described the outside of the house. Can you describe that again to me, Cindy?
CINDY: It’s blue with a big ol’ picture window and the whole house is… If you drive down Old Harbor Road, the window’s on the right side and the garage is to the left. 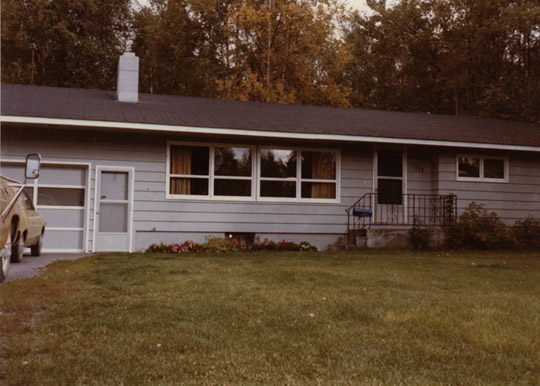 FLOTHE: Was there anything else unusual about the house?
CINDY: There’s no trees in the front yard.
FLOTHE: OK. I think before you mentioned something being on the roof of the house.
CINDY: Yep. There were horns.
FLOTHE: Horns?
CINDY: Yep. (inaudible) The horns that were up there, the big ol’ antler horns, they’re called. That was everywhere in the whole… In the basement there was fish, there was wolf skin, there was stuffed animals everywhere. Big ol’ like caribou and goats heads, big ones stuffed everywhere. Ducks and birds. 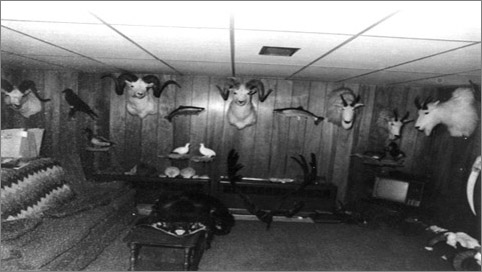 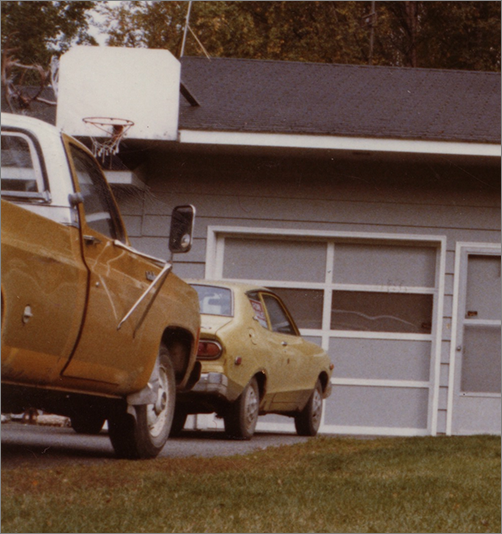 FLOTHE: Where did he park the car?
CINDY: The Buick car, inside the garage.
FLOTHE: How did he get in?
CINDY: The automatic opener.
FLOTHE: He had an automatic garage door opener?
CINDY: The garage was opened. (inaudible)
FLOTHE: Either he had opened it or it was already open?
CINDY: Uh huh. I was kinda trippin’ I really thought (inaudible)
FLOTHE: This car that was in the driveway – how new or old was this car?
CINDY: (interrupting) It was an older car.
FLOTHE: An older car.
CINDY: Uh huh.
FLOTHE: Can you describe it a little bit more to me?
CINDY: It was probably about a ’72, cream-colored Datsun, with a kinda station wagon in the back, the kind that you used to… It was about a ’72 or ’73.
FLOTHE: You think if I showed you some pictures of some cars later on you might be able to pick it out?
CINDY: Uh huh. Uh huh.
FLOTHE: OK. So you go into the garage, what happens then, when you get into the garage? Were the lights on or off?
CINDY: On. He takes me up the stairs to the garage, I mean, to the house. After we get in the garage we gotta go up these stairs. About four stairs to get into the house. And we got to the house and he drug me downstairs to the… as soon as you walk in there’s a carpet to the right. To the left is the basement.
FLOTHE: At this time, so I know what you’re talking about, ‘cause I have not been in the house, Cindy…
CINDY: Uh huh.
(sound of paper being torn off a tablet)
FLOTHE: Would you draw me a diagram of the house and I’ll turn the tape off just for a minute while you’re doing that. I’m not going to help you do that, all right?
CINDY: OK.
FLOTHE: Turning the tape off at 8:34 pm.