If you wanted to meet someone in downtown Anchorage and not look out of place, Alice’s 210 Cafe was the perfect spot. In its day, it was the crossroads of Anchorage, the great equalizer run by a woman, Marge Dube, whose mission in life was “making good food and feeding everyone.” (1) When Sherry’s friend Lisa Nyland learned she was to meet someone there for a professional photography session, she thought nothing of it. Alice’s 210 belonged to everyone; even, it turned out, Robert Hansen.

“Sergeant Haugsven informed affiant [Sgt. Glenn Flothe] that he had interviewed Lisa Nyland, who stated that Sherry Morrow had stayed at Nyland’s residence on the night before her disappearance, and that Morrow had told Nyland on the day before her disappearance, Monday, November 16, 1981, that Morrow had an appointment with an unidentified man the following day at Alice’s 210 Restaurant (sic) at noon, and that the man had offered Morrow $300.00 to meet him there and allow him to take pictures of her.” 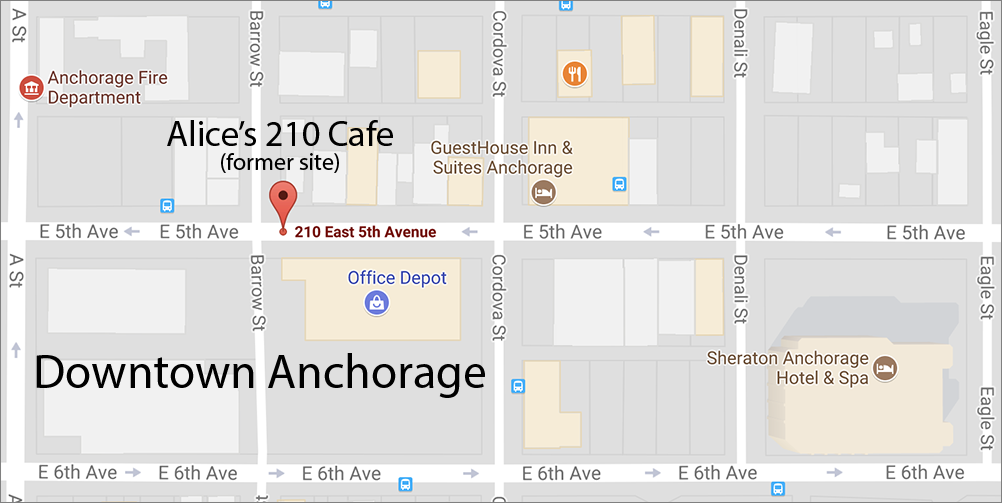 “Nyland further stated that the following morning she awoke at approximately 11:30 am, and found Morrow had left the residence, but had left a note for Nyland stating that she had gone to ‘do that photo layout.’ Nyland said that she never saw Morrow again. Nyland also said that Morrow had told her she met the man who offered the money for photos only a few days before.”

(1) Marge Dube was a quintessential Alaska character. According to her 2001 obituary, “she often fed people who couldn’t pay… At her request, no memorial service will be held. Friends are asked to please stop smoking, as Marge did during the last three years of her life, after having smoked 62 years… Her family added, ‘She will be placed in a porcelain vase that was a gift to her from the family of a KLM pilot whose life she saved by breaking up a mugging.’ In lieu of flowers, she asked that friends leave food out to feed the ravens.” (Anchorage Daily News, December 2001)