We resume our excerpts from the previously unpublished writings of Walter Gilmour. In this installment, he talks about how he met Glenn Flothe, who would go on to play a critical role in the arrest and conviction of Robert Hansen.

Walter Gilmour: “I first met Glenn Flothe in late 1971, at about the time of Beth van Zanten’s homicide, when attacks on several young women took place. We were both in one of those “touchy-feely” psychology courses that seemed to spring up during that period. Flothe worked as a janitor at the time, but I recruited him for the State Troopers. His life hasn’t been the same since.” 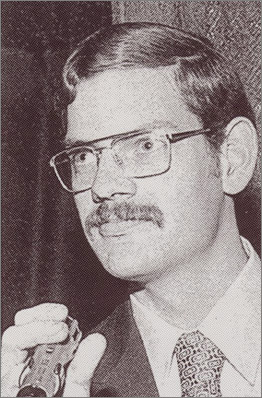 “If I were asked to describe Flothe, I’d say he was the kind of guy who looks like his body grew longer than he expected it to. He’s the kind of guy who wears his cop-ness, if there is such a word, in the way he carries his shoulders, like he’s carrying the weight of justice or something. One of his most enduring traits as a cop is his quiet persistence.”

By the time Flothe was assigned the case of the missing dancers, in late August of 1983, he had already met with — and confronted — the murder of multiple young women. One of his first experiences with homicide work came after the murder of ZeZe Mason in the summer of 1972.

I remember the lengthy discussions I listened to in silence — as you [Gilmour] and [Joe] Hoffbeck talked about the ZeZe Mason case. The blood, Zieger, disappointment and frustration. I have always remembered the look in your faces. Being a trooper was something special — it was more than a job. Your caring made a lasting impression. Glenn Flothe, commenting on the ZeZe Mason case

When he picked up the missing dancer’s case, Flothe started working the streets of Anchorage, looking for leads. He even rearranged his schedule so it matched the nocturnal habits of his informants. That approach eventually paid off.

Friday night is a big night in the sex-for-pay business. On a Friday night in June, Cindy Paulson was standing on the corner of 5th and Denali, in the heart of the downtown Anchorage strip. A 17-year-old prostitute, she would seem to be perfect prey for the Anchorage serial murderer because, like so many of his victims, she was inexperienced.

At approximately 3:30 am, a man driving a green Buick Century sedan approached her. A man later identified as Robert C. Hansen. A man with bloodlust in his veins.