When Cindy Paulson asked to use the bathroom at Robert Hansen’s house, it served to highlight her dilemma. Before letting her use the bathroom, Hansen insisted on tying a rope around her neck. When she tried to escape through the bathoom window, she found it nailed shut. Outside the door, she heard the rattling of chains; Hansen was about to trade one restraint for another. Still, Cindy kept her head about her, retaining her tampon in place, rather than throwing it away.

FLOTHE: How do you get into the bathroom?
CINDY: The door opens to the bar and the clothes are here and then the bathroom is right here and you go in. And then as you come out, there’s a foosball table here and a big pillow right there. 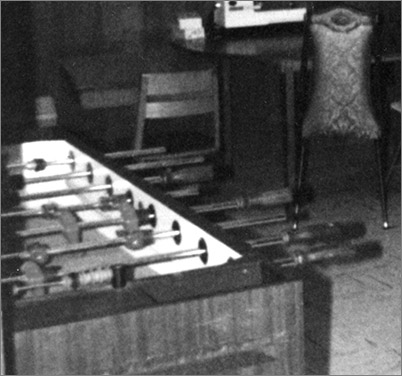 CINDY: (Cont.) And that’s where I was laying by the couch at the frame of the pool table. (voice cracks)
FLOTHE: Describe the bathroom as best you can. Everything you can remember being in the bathroom.
CINDY: OK, the toilet was right here (points to diagram). To my right is the sink and a cabinet. To my left is a window that’s nailed (shut)… It’s closed completely. And then right in front of me is a shower that’s pink and black. The floor of the shower was black and the cabinet was white on the inside, it was black on the outside.
FLOTHE: You mention a window. Why did you notice the window?
CINDY: ‘Cause I was gonna climb out.

FLOTHE: You were going to climb out.
CINDY: Hell yeah.
FLOTHE: Why couldn’t you climb out the window?
CINDY: ‘Cause I knew it wouldn’t open.
FLOTHE: Did you try it?
CINDY: Yeah.
FLOTHE: Did he stand there and watch you while you were…
CINDY: No. When I had went to the bathroom he had walked behind me with a rope around my neck. And then he left. And when I got done then I started walking out and I heard chains rattling and he said ‘go back in’ and I didn’t, I just came out anyway.
FLOTHE: Do you remember any toiletry type articles being in the bathroom? You know how people have things in the bathroom…
CINDY: There was nothing.
FLOTHE: Shaving stuff…
CINDY: No, there was nothing like that.
FLOTHE: Did it have a shower or a bathtub or what?
CINDY: Shower.
FLOTHE: Shower. Was it like a…
CINDY: A small shower.
FLOTHE: Small shower. Was it built into the wall or how was it…
CINDY: It was sticking out.
FLOTHE: Sticking out. Did you throw anything away in the bathroom at all?
CINDY: No. I kept my tampon in me.
FLOTHE: Did you put a new one in at all?
CINDY: No, I didn’t have any and I didn’t want to… (inaudible). ‘Cause I knew if I got out of there, he was getting caught. ‘Cause I needed evidence, and that was my fucking evidence. (in a soft voice) That was my evidence.
FLOTHE: What was?
CINDY: The tampon.
FLOTHE: Why did you think that would be evidence?
CINDY: From what I did, I knew that the tampon would keep stuff from going inside of me, but it would hold it in there. And it did a little bit. It showed just a little bit under the black light. A little bit.
FLOTHE: This is at the hospital?
CINDY: Um hmm.
FLOTHE: OK.

On October 11, 1983, Sgt. Flothe sent the Cindy Paulson evidence to the FBI. This included her clothing, as well as the rape exam kit containing head hair, cut pubic hair, combings of her pubic hair, vaginal fluid stains and her tampon. The FBI received the evidence on October 18th. By December 14, 1983, the FBI was able to determine that Robert Hansen was the likely source of the semen found on Cindy Paulson’s underwear.
NOTES: Because of its chemical composition, semen will fluoresce when put under an ultraviolet “black light.” Hence the reason for Cindy’s black light test at the hospital — they were looking for signs of semen. Although sophisticated DNA analysis was not available at the time, FBI pathologists could (and did) run a series of tests on Cindy’s evidence, including ABO (blood typing) tests.